Know All About Garrya Silk Tassel Tree - Daylilies in Australia 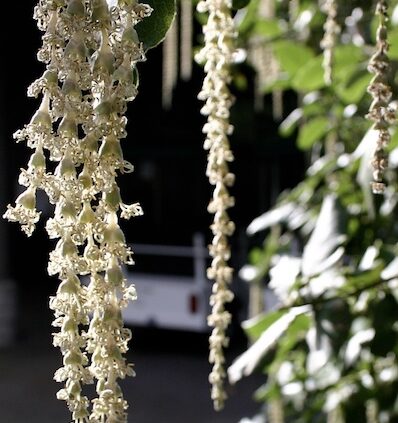 Garrya tree or silk tassel is a dioecious shrub belonging to family Garryacea. The plant is a low maintenance ornamental plant used mainly for landscaping. There are 18 species of plants in the genus Garrya. They are native to North America, Central America, and the Caribbean islands. These plants grow to a height of 1 to 5 metres. They have simple leaves that are arranged in the opposite. Leaves are oval or elliptical in shape, dark green or grey-green in colour and are leathery. The long lasting flowers are pendulous or catkins with grey-green colour that gives an interesting show to a winter garden. When it is loaded with flowers in mid September in Australia the tassels reach down from leaf joints at the ends of the branches. This takes place when my Bulbinella Nuttens and the Snowball tree are in full bloom. The difference between the male and female trees is that the male cascading flower tassels dangled longer than the female flowers. Berry type fruit bears two seeds that can be eaten by birds.

Where to Plant Garrya elliptica

Garrya is usually grown either in a woodland setting that keeps a slightly shaded spot or as a wall shrub. A wall will provide shelter and warmth for growing. It’s no good planting a row of this tree down the sides of driveways Garrya varieties require sheltered sites, as the leaves are prone to scorch in exposed or windy areas. The plant is very tolerant of coastal conditions and pollution. As a specimen plant, it will easily grow in pots and containers, although it is a good idea to replant into a larger container every so often.

Though growing Garrya tree is not particular about the soil type the plant prefer well-drained sandy or rocky soil.

It is drought hardy this means it is highly tolerant of drought conditions. Avoid planting Garrya in very cold areas without cover.

How to Prune Garrya elliptica

Garrya shrubs require pruning to keep them in good shape. It is better to prune the plants in early spring before the new growth starts or when the catkins are faded. Cutting back in 3 to 4 years causes healthy re-growth. When new shoots come out, thin out the branches keeping only the strong and best shoots. You can trim them using hand shears or secateurs to keep them as hedges.

How to Propagate Garrya?

The species belonging to Garrya can be propagated using seed. A friend of mine has one and seedlings are often seen near the tree, I have thought about getting one. However, knowing that cultivars will not form true when raised using seeds this is why I am not tempted to dig the seedlings. For true cultivars can be best propagated using stem cuttings which are semi-ripe. It is better to take the stem cuttings during summer this way you will have the exact same tree.

The main problem with the plant is that it becomes scruffy as the older leaves get shed during spring. The leaves will turn yellow or brown and may appear scorched. During a sharp winter, the plant develops winter damages such as unsightly browning or yellowing of the leaves. Leaf spots may develop during autumn or early winter. Prune the worst affected branches and remove the spent catkins to improve the appearance of the plant. In warmer areas, the plant is susceptible to spotting of leaves which is a fungal disease. Remove infected part to maintain a healthy plant. Another major problem is the poor flowering. This is mainly caused by planting in the wrong location, poor pruning, and environmental causes.

The important cultivars of Garrya are

December 29, 2020
/ by
dayliliesinaustralia
Ask A Question