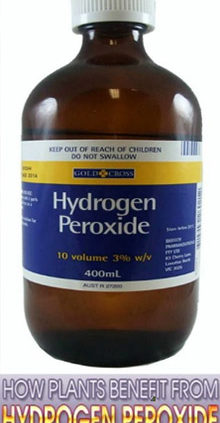 Hydrogen peroxide is usually used for industrial, chemical, and even biological purposes. The fact that this clear and slightly viscous liquid can actually be very helpful when it comes to maintaining plants, specifically daylilies. Here are some of the important things that you definitely need to know about using hydrogen peroxide for plants.

Hydrogen Peroxide is known for its chemical formula which is H2O2. As previously stated, this substance is described to have a clear and viscous appearance. It has a distinct smell and it may actually look like water. The only difference between this substance from water is that the former has an extra oxygen atom making it very useful for different purposes. It can be used as a cleaning agent, fuel, and even treatment because of some of its known health benefits.

With the extra oxygen provided by Hydrogen Peroxide, it might react with other substances containing stable molecules of oxygen. If you add hydrogen peroxide with water this can be very helpful because some of the plant’s harmful chemicals like Chlorine can be effectively removed. Hydrogen Peroxide can serve as a steriliser of the plants water supply. This substance can effectively remove some of the most dangerous disease causing spores that can be very damaging to the plants. You can be sure that you will be able to prevent possible plant diseases and even treat underlying ones which your plant may already have by simply using Hydrogen Peroxide properly.

The Shortage of Oxygen

Most plants often acquire diseases and end up rotting because of the lack of an adequate supply of oxygen. Oxygen is very essential in maintaining the integrity of the entire plant.  Some conditions may actually cause a shortage of oxygen in plants. When too much water is placed on the soil where your plants are, there can be a great chance that the plants will lose an adequate supply of oxygen. Too much water can occupy the air spaces in the soil and deprive the plant of the right amount that it deserves. This can cause the dying or rotting of roots within a span of just 24 hours. This will greatly limit the ability of the entire plant to get the proper nutrients that it needs for growth. The plant will start to look pale yellow and will eventually wilt because of this condition.

It has already been noted that the Hydrogen Peroxide contains additional oxygen. Extra oxygen may be released if water is treated with Hydrogen Peroxide, allowing the plant to get adequate oxygen. The roots will be exposed to high quantities of oxygen, promoting the overall health of the plant.

How Much Hydrogen Peroxide For Plants

First of all, you must select the appropriate concentration of water and Hydrogen Peroxide to water your plants. This substance is available in a variety of strengths or concentrations ranging from as little as 3% to as much as 35%. There are also many sorts available at your local grocery store or pharmacist. There is food grade hydrogen peroxide, which can be highly beneficial to plants. The highest concentration that is strongly recommended is 35%. Before applying this product to the plants, make sure it is appropriately diluted. A high concentration of hydrogen peroxide can be extremely harmful not only to the plant but also to your skin and to your clothing.  If you come into contact with the chemical, you should rinse and clean it immediately. When handling Hydrogen Peroxide, you should always wear additional forms of protective clothing eg) gloves, goggles or a face shield, etc

Making the Mixture and Ensuring the Dilution

To obtain the required dilution, ensure that the combination has a ratio of one component to about eleven parts water. It is highly recommended that you use distilled water. You must also guarantee that the container used for the mixture is not clear, so that it is not exposed to light. Begin by making a combination with lower concentrations. If you’re used to it, you might choose to raise the concentration of the Hydrogen Peroxide you use. Keep in mind that the higher the concentration, the more water you will undoubtedly require. For example, if you use a 3% concentration of Hydrogen Peroxide, it is highly recommended that you add about 2 or 3 teaspoons of hydrogen peroxide to half a bucket of water.

Hydrogen Peroxide is beneficial to plants; in fact, there are several ways to apply Hydrogen Peroxide to your plants and garden.
Spray the plant leaves with a combination of Hydrogen Peroxide and water. This may be used as fertiliser to help your plants thrive.
You may also sprinkle the mixture on your seeds to hasten their sprouting.
If you have plant cuttings, soak them well in the mixture before planting them in the soil.
If your plant already has fungal problems, make sure you spray the mixture directly on the damaged area to treat it. Whether it’s on the leaves, roots, or even the stem or stalk.
You must also ensure that you apply a suitable amount of the combination.
Did you know…?? Excessive use of hydrogen peroxide can harm plants.

These are some of the most important things that you definitely need to know about Hydrogen Peroxide and its use in plants. If you are still in doubt about the plant benefits of Hydrogen Peroxide. You can definitely try it for yourself and see how much Hydrogen Peroxide you need to mix with water to spray on your plants, which will maintain the growth of your daylilies effectively.

August 10, 2013
/ by
dayliliesinaustralia
Ask A Question