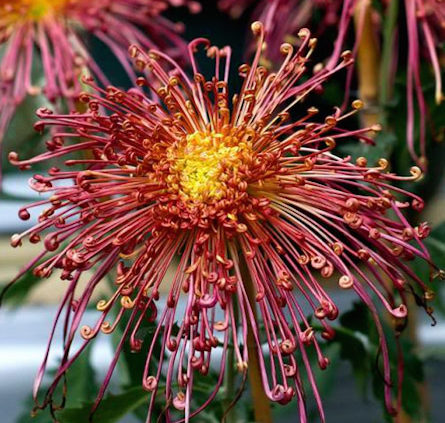 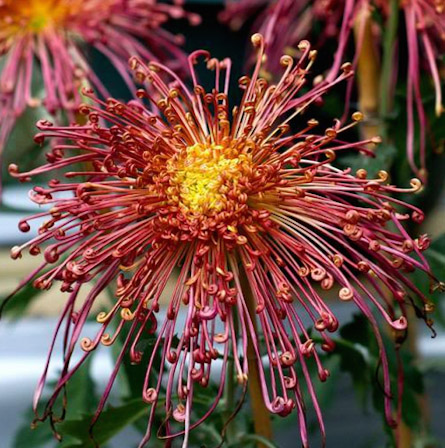 Also known as mums, chrysanthemums flowers and derived from the Greek words chrysos meaning gold and anthemon meaning flower. Chrysanthemums are one of the most popular plants sold around the world, next to only the rose. There are quite a few interesting facts about chrysanthemums. Formerly known by the scientific botany name Dendranthema, chrysanthemums were first cultivated in the 15th century BC China as a flowering herb nearly 2,500 years before it reached Europe. It was brought by Buddhist monks to Japan in 400 AD where it eventually became the national flower.

Chrysanthemums flowers are closely related to the daisy and are a symbol of mothers day. Traditionally given to mothers for Mother’s Day in Australia. They are also the birth flower for November symbolising the sun, meditation, fidelity, optimism, joy and happiness. There are 9 categories that chrysanthemums are listed according to type. Those categories are anemone, buttons, cushions, daisy, decorative, pompom, quill, spider and spoon. In addition to their aesthetic qualities, chrysanthemums have been used for their health benefits. Some of the benefits of drinking the plant in a tea include relaxation qualities, relief from head congestion, strengthening of the lungs and assistance in digestion. The flower can also be used topically for relief of dry and itchy eyes and from heat in the upper body. In scientific studies, this plant has even been shown to reduce indoor air pollution. Pictured is a spider a more exotic chrysanthemum.

How to Plant and Care for Chrysanthemums

Chrysanthemums flowers bloom in autumn in Australia. Learn the special way exhibitors strike to grow their fancy chrysanthemums flowers from a single cutting. They produce flowers in a great deal of sizes and shapes and in a wide array of colours. They can be grown from seed but are usually given or purchased as a potted plant. Chrysanthemums flowers should preferably be planted during the early spring after the potentially freezing winter weather has passed. Growing chrysanthemums flowers require full early sun usually from 5 to 6 hours a day aside from this chrysanthemums should be planted in fertile, well-drained soil with a pH of at least 6.5. These plants are pretty hardy survivors but benefit from a light and frequent supply of a balanced fertiliser or well rotted cow manure during the growing season. Potted chrysanthemum plants are forced to flower early and are available in shops to buy and to decorate your house inside when in full bloom.

Chrysanthemums are susceptible to fungal infections due to powdery mildew, like white rust and/or brown rust, and should be placed in a dry area. White rust is caused by the fungus Puccinia horiana which spreads by airborne spores leaving a white coat on a plant’s leaves and this typically occurs in late summer and autumn. This disease may stunt plant growth and reduce their endurance abilities. Brown rust is caused by the fungus Puccinia chrysanthemi that produces dark brown spots on the underside of leaves and is not as damaging as white rust.

Some Chrysanthemum shows to attend in Australia. Spectacular – Chrysanthemums flowers staged at shows are well worth seeing:

March 25, 2014
/
By dayliliesinaustralia
Ask A Question