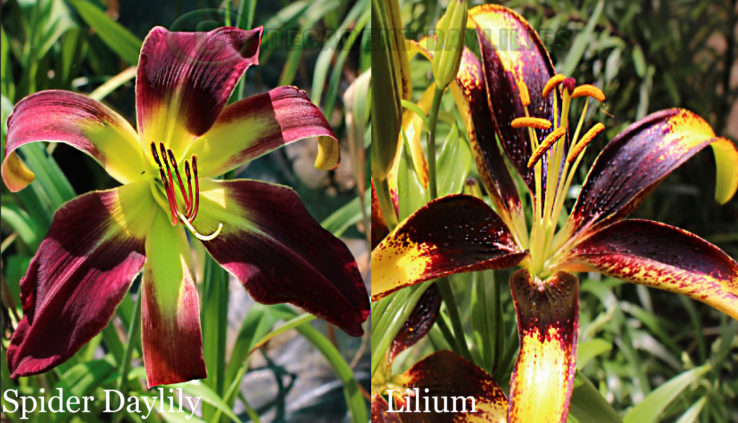 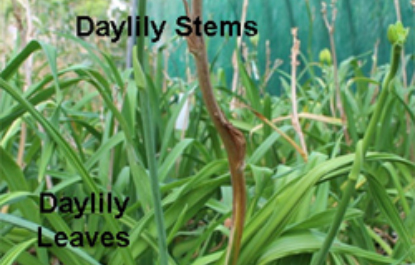 A Daylily has a very thick and tuberous type of roots. The plants also have long blades that are shaped like straps, which grow and form clumps and the flowers get up to four feet high. The flowers themselves grow on stems with no leaves that have several branches and buds

The blooming flower has six single petals some displayed in double layers, most times a different colour is displayed in the centre/throat part of the flower than the petals.

Sadly, they only bloom a single day, this is the reason for their name. They can appear in shapes such as round, triangle, star or spider shaped. They are rarely used for cut flowers, since the flowers that opened in the morning will die by the end of the day, but don’t worry there will be more new flowers opened tomorrow. The flowers will keep opening for at least six weeks new fresh flowers open each day. 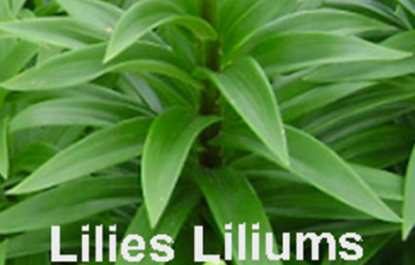 A true lily comes from a bulb that has soft scales that overlap. More than 100 kinds exist and some of these include the Asiatic, Oriental and the Martagon lilies. These grow from one stem that is unbranched and can reach up to ten feet high.

They too have six petals, as well as six anthers. They come in several colours. Some of their shapes include the trumpet, bell, bowl, funnel and curved.

True lilies bloom for about a week, in contrast to only one day for the day lily. Lilies are also very toxic to both humans and pets, specifically cats.

Know About Daylilies and Lilies How to Tell Them Apart

It’s quite easy to distinguish between Daylilies (Hemerocallis) and Liliums the true lily flowers, once you have grown them in your garden or when someone has pointed out to you, their characteristics. In gardening it is common for new and old gardeners to accidentally call any plant by the wrong names, a good example of this is the geraniums and pelargoniums. But today we are talking about daylilies and lilies, reasons because the common florist Lilies, Asiatic lilies, or potted LA Hybrids look the same in appearance.

There are three main differences to the eye, between the two complete flowering plants, that were once called lilies years ago. Both daylilies and Liliums originally belonged to the Liliaceae family. Today the Daylilies (Hemerocallis) have moved to their own plant family Xanthorrhoeaceae and this maybe a factor of why daylilies are still called lilies.

Let’s face it, the two flowers pictured do look the same below, some other types of daylilies have the same shape as lilies as well. We will stop the confusion by showing you how to tell the difference between daylilies and Liliums with photos and descriptions.

When you see the pictures of the growth habits you will agree that the Daylily and Lilies / Liliums are nothing alike. I think it’s like comparing apples with oranges but let’s see what you think.

There are three main differences between the two flowers.

The 3 differences are the growing parts. These are the underground storage structures, the flower stems and the flowers themselves, are all different take a look.

Different Types of Lilies, Daylilies, and Their Pictures.

First, are the underground organs, all daylilies have a tuberous root system that joins a crown and then the leaves, where as Liliums all grow on an upward single stem from bulbs with scales. Some Liliums have basal and stem roots as well.

The Lilium bulbs themselves are classed as concentric or stoloniferous both having scales and roots attached to a basil plate. The stoloniferous type use underground stolons, these stolons spread below the ground surface. This is the mother plants way of sending nutrients through stolons or underground runners to grow, new daughter Lilium bulbs.

Liliums are divided by bulb offsets or bulb scales (called bulb scaling) where as daylilies are increased by division and divided by using a knife to cut through a hard white core know as the daylily crown located between the roots and the leaves.

How to Identify Lilies and Daylilies By Their Leaves

Difference Between the flowering Stems of the Daylilies and Liliums 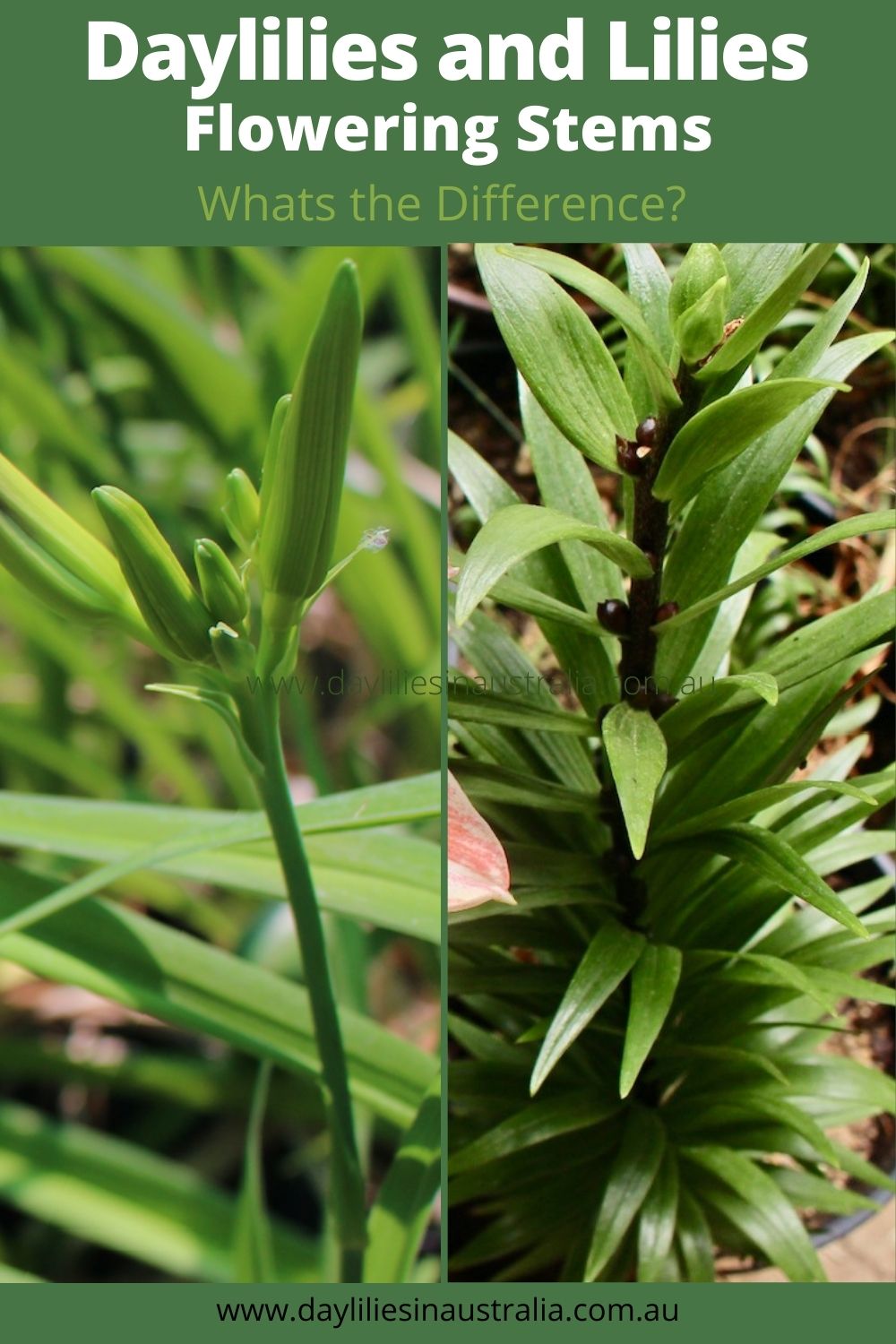 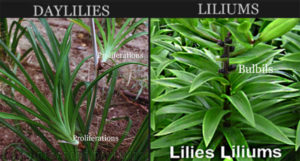 Still, the Tiger Lilies reproduce differently than other Lilies by making shiny black aerial bulbils on their stems while in bloom, where as some daylilies grow plantlets or proliferations on their stems. This is a small daylily plant shown, the exact clone as the mother plant. These proliferations can and usually bloom the following season if they are not already flowering on the mother flower stems, while the daylily is in full bloom.

Flower Structures of Daylilies and Lilium Flowers Are Different

Some of the important parts of the daylily and Liliums anatomy are the reproduction parts of the flower, the stigma, pollen, and stamens used when hybridising. As you can see close up in the next picture, each flower pictured shows the flower parts on both the Daylilies and Lilium flowers.

The daylilies and lilies resemblance in appearance is entirely different when it comes to the male and female central flower reproductive structures. The pistil on the daylilies is slightly curved and has three tubes together, this is easily seen at the end of the pistil, while the Lilium style is straight with a broad flattened end to the stigma that looks like a redheads match stick. The thin stalks of the stamens, filaments with anthers (pollen) also have a different outline to each other.

Daylilies bloom at a set time during spring and autumn as opposed to Lilium blooms up to 90 days after planting time in winter to spring. Liliums have from one to 12 flowers depending on the variety, more than 2 flowers form a rosette of blooms at the top of the leafy stems compared to daylilies have up to 50 flowers that appear on 2 to 5 branched leafless stems. 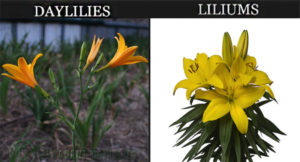 As you can see the complete flower in some varieties of Lilies may look the same but they are certainly unalike when it comes to their overall growing habits.

The Difference Between Orange Tiger Lily and Daylily

The orange tiger lilies (Lilium lancifolium) or Lilium tigrinum (Yellow Tiger Lily) Lilium lancifolium flaviflorum they are double or single downward facing lily blooms with black spots. These two flowers are often compared with the daylily, even though the flowers look nothing alike. 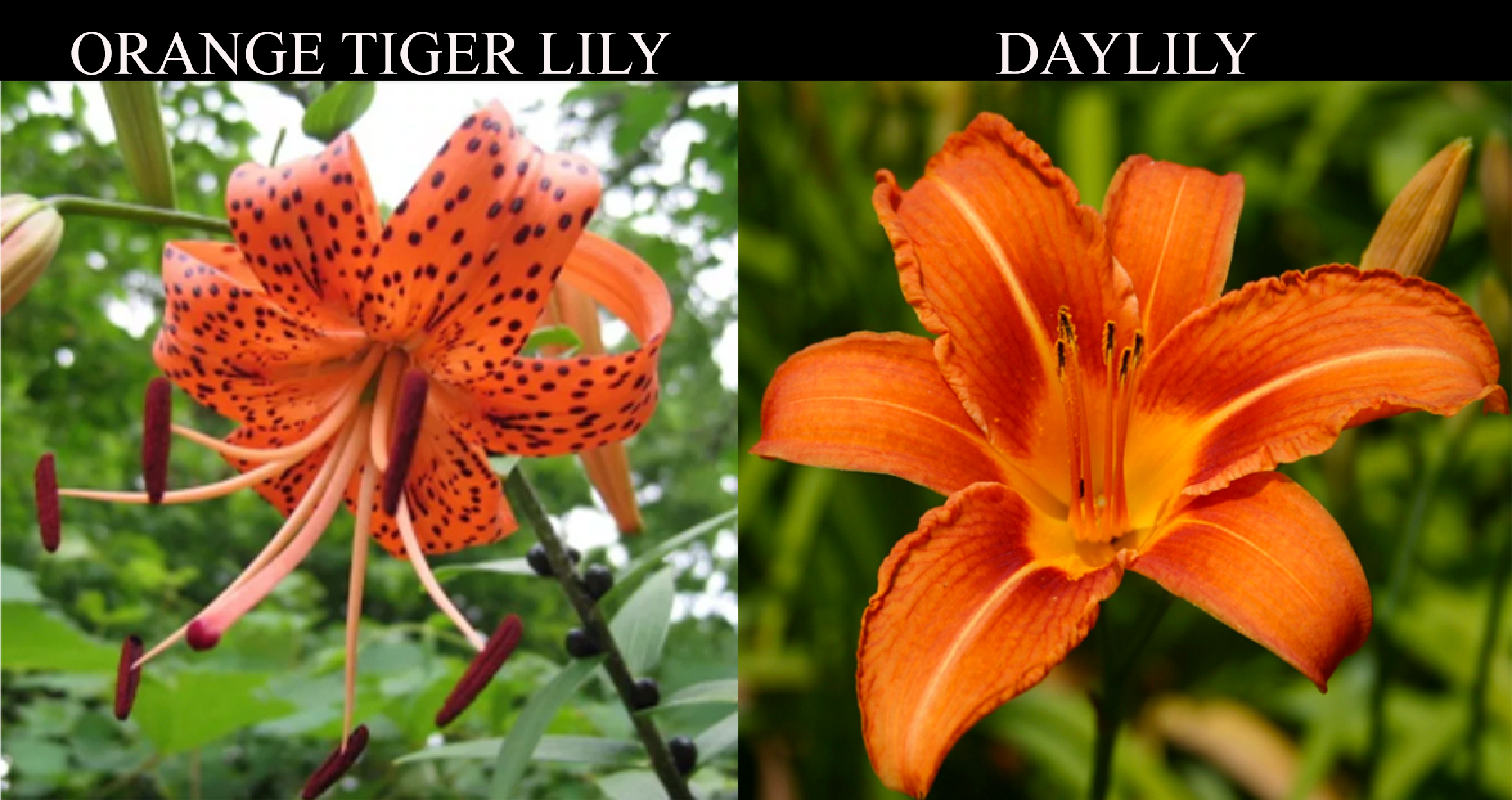 March 18, 2019
/ by
dayliliesinaustralia
Ask A Question