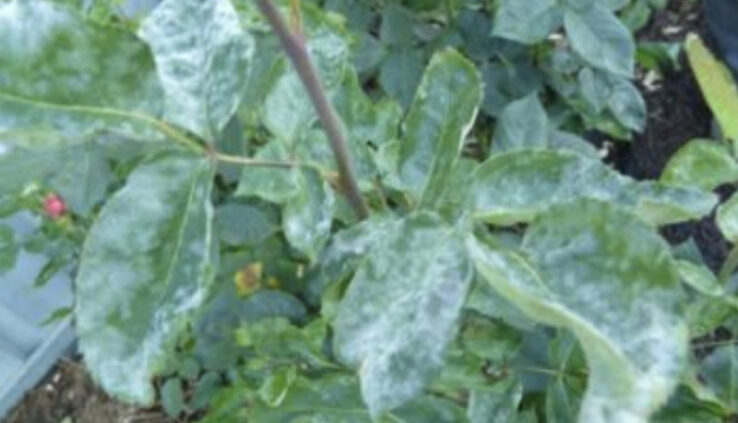 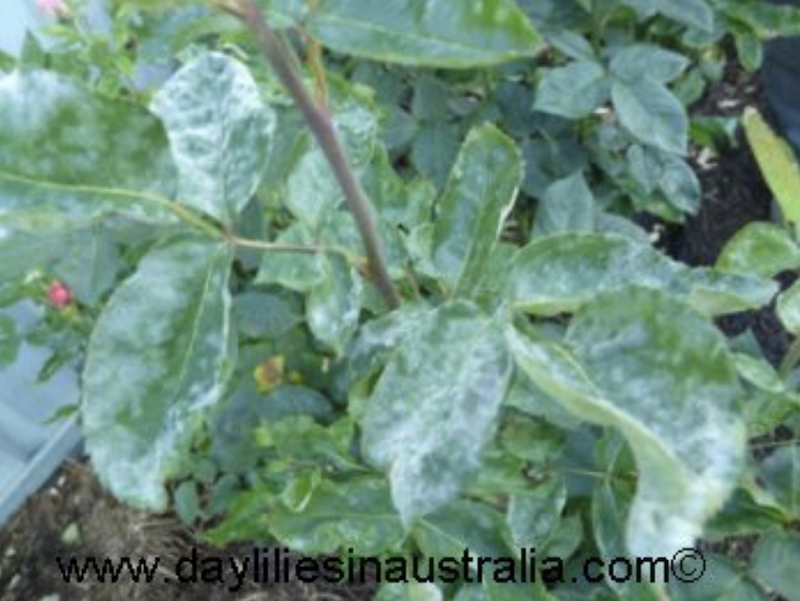 Powdery mildew is a common fungal disease described as a white to greyish powdery coating on the upper surfaces of the leaves, which can also spread to cover the entire leaves over time. Powdery mildew can be found on flowers, buds and in some cases the fruit and vegetables, flowering shrubs and perennials, these are the symptoms of Powdery mildew.

Powdery mildew can affect all types of plants as stated above it is spread by wind born spores, water splash and insects. The powdery mildew can survive by overwintering on both plants and plant debris. Once the weather starts to warm up it will begin to populate via asexual reproduction. Powdery mildew does not require direct contact with moisture to thrive like the normal mildew we are used to seeing overtake our bathroom or kitchen. All it needs is warm summer days and cool nights to grow and disperse its spores in the wind to other parts of the same plant, or new plants close by. Spores will continually reproduce until destroyed so the removal and destruction of infected leaves is of vital importance.

Powdery mildew is a problem due to its ability to lower yields from food crops and alter their normal flavour, creating a great financial incentive for its treatment and eradication. However, on ornamentals, it is relegated to an unsightly nuisance that can weaken the plant but rarely kills it. In regards to ornamentals in the majority of cases, it is not worth treating. Powdery mildew will stunt the growth of bushes and trees and is worse where there is high rainfall.

Which Plants Get Powdery Mildew?

Plants that are more prone to an attack from powdery mildew are ornamentals such as grapes, peonies, apple trees, hydrangeas, bee balm, lilacs, garden phlox, and roses. Vegetable crops, which may become affected, are beans, tomatoes, cucumbers, zucchini, squash, pumpkins and melons. Plants on the peripheral of the garden, situated in corners, or plants that are experiencing stress of some kind are usually attacked first, with the mildew then gradually working its way inward to the rest of the garden. If an adequate amount of plant is covered with powdery mildew photosynthesis will be weakened and if this happens you will see leaves fall off plants well before they should, these leaves will be infested with powdery mildew. Powdery mildew is seen worse and more common in warm, dry climates.

Areas with dry shady conditions are ideal for powdery mildew, as are areas with poor circulation and temperatures between 15 deg C and 25 deg C are excellent weather conditions for powdery mildew. So an effective measure against the disease is to ensure you plant resistant cultivars while ensuring you have a good airflow within your trees or shrubs. During the warm summer months inspect the plants regularly and remove any parts that are showing signs of the infection. It’s important that you destroy infected material rather than composting to help stop the disease from spreading.

How to Apply Organic Fungicide Without Poisons.

Concentrate spraying this mixture on the stems and the tops of the leaves and under sides. If it rains be sure to apply a further coat or apply every 10 days. How the baking soda works it creates an alkaline environment on the leaf, this means the fungus cannot settle or take over on the leaf.

No baking soda in the cupboard, then use plain milk and water, mix 30% milk to your spray container and fill it up with water, this will fix and stop powdery mildew in its tracks. You can spray this mixture during the morning but not while it is too sunny. The proteins in the milk act together with the sun to prevent powdery mildew. Milk preventing powdery mildew recipes have been around and proven for a long time and will control a large range of plant problems. Do not add too much milk to water as it could support black sooty mould.

To save the confusion baking soda, bicarbonate of soda, sodium bicarbonate, sodium hydrogen carbonate, these 4 elements are mingled together and are one and the same, that make up the active ingredient of baking soda, the white odourless white crystalline powder with the formula NaHCO3.

Powdery mildew doesn’t like plain water too much either, so watering your daylilies can help you prevent and control powdery mildew. Watering early in the day is best as you don’t want too much moisture lingering around when the day starts to cool down and late in the evenings.

Some say add some dish soap to the mixture is good for powdery mildew treatment, but at the end of the day, the dish soap is used as a wetting agent, but this is not necessary. Tell me where it says “to spray dishwashing liquid on plants and its safe to do so”, on the dishwashing liquid container? Spraying bleach based soaps and detergents on your plants can be harmful especially on soft leaf plants. But on the other hand, by spraying your plants with milk and sodium bicarbonate there are no ill effects. Wetting agent is not needed when spraying milk and bicarbonate of soda or baking soda to prevent powdery mildew, and these products are safe and will not hurt your plants. Be careful if you add in vegetable oil to the mix because it can burn the leaves of your plants if sprayed on the leaves during the heat of the day and the vegetable oil residue can still burn the plant leaves the following days.

Why not use Neem Oil it is a safer option to use that can replace bleach based soaps and cooking oil. You can use neem oil on its own, to treat powdery mildew the directions to do so are listed on the container. The only downside to neem oil is it has an unpleasant smell,  but don’t let that turn you off, look at the bright side, the smell of neem oil is used to repel leaf eating insects, it is organic as well as it is a good product.

These are some of the best organic treatments and preventatives for powdery mildew, keep your plants watered this will help to control powdery mildew on the leaves, flowers and even buds of your daylilies.

November 5, 2013
/ by
dayliliesinaustralia
Ask A Question