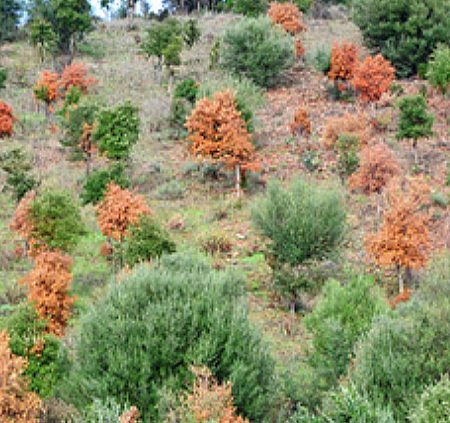 Dieback of plants is the symptom of Phytophthora infection. The plant pathogen called Phytophthora cinnamomi is the cause for dieback. This plant pathogen specifically attacks the root system of plants like zamia palms, azaleas, roses, grass trees, avacados. Australian natives that are highly susceptible are jarrah, wattle, grevilleas and banksias. This soil-borne water mould affects about 40% of the native plants in Western Australia and more than half of endangered species in the region. Agricultural as well as garden plants get affected by Phytophthora. This mould is highly invasive and even moving a small amount of soil containing the mould can spread the infection.

As the dieback attack spreads faster in landscapes, the symptoms include

The mycelia of the fungus spread through the root and start absorbing carbohydrates and other nutrients needed for plant growth. This causes the death of root tissues as they will be unable to absorb nutrients and water.

It is not easy to eradicate Phytophthora once they infect an area. using fungicides such as Phosphonates can increase the resistance of the plants to dieback disease. The fungicide is ineffective in killing the pathogen. During the active growing months of the fungus, spraying phosphates gives better protection to the plants.

To prevent the Phytophthora infection from spreading to further areas, critical management of the disease is necessary. The spreading can be prevented by

If you are using fungicides to control the infection, use according to the instructions provided.

March 4, 2018
/ by
dayliliesinaustralia
Ask A Question