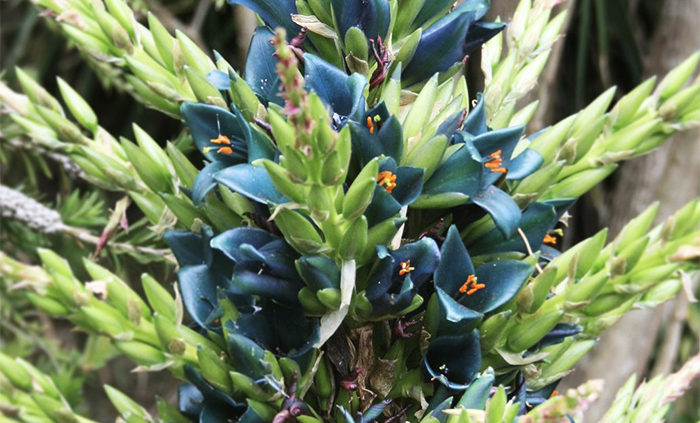 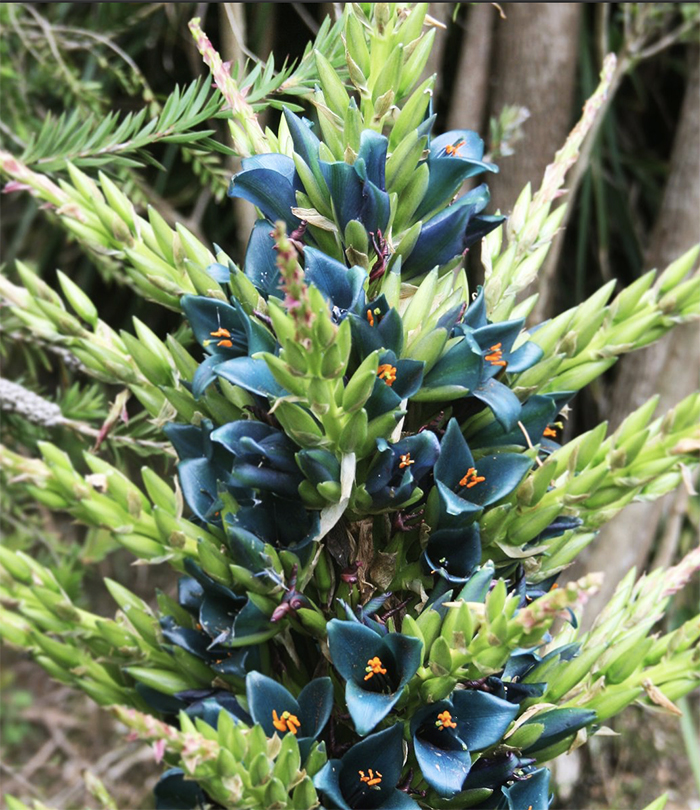 Puya alpestris is an ornamental plant belonging to family Bromeliaceae. They are also known as sapphire tower because of the teal-coloured flowers produced on the tall inflorescence. They naturally occur in the slopes of Chilean Andes and Argentina. This is a succulent which can grow to a height of 2 to 3 feet and spreads to a width of 3 to 5 feet. Puya alpestris has re-curving leaves which are light green on top and silver-grey beneath. The spiny-margined leaves are wider at the base and narrow at the tip. The leaves are 18 to 24 inches long. Flower spikes which grow up to five feet are usually produced during spring. They are ideal for landscaping in the arid region. The flowers bear orange stamens and the inflorescence branch terminates in a sterile branch with pink coloured bracts which acts as the place to land for small birds which feed on nectar. The nectar also attracts the bees.

The Uniqueness of the Plant

Puya alpestris has a unique characteristic. They are protocarnivorous. The insects or animals can get trapped in the spines. When the animals die, the nutrients are absorbed by the plant. The spines also protect the plant from grazing animals. The spines make them a bit difficult for gardeners to manage. But, the beauty of the flowers is worth the effort. It will take 5 to 6 years for the plant to produce flowers for the first time.

Puya alpestris needs full sun as they originally belong to arid regions. They need plenty of sunlight and water during the growing season in summer. During cold temperatures, however, the plant requires dry soil. Unlike most of the bromeliads, this plant is terrestrial and requires well drained soil. They are hardy to low temperatures to a certain extent. They can withstand temperature as low as 18 degrees. However, it is necessary to protect the young plants from frosting. During the dormant season, the plant requires a very low amount of water. If the temperature is extremely low, move Puya plants in containers indoors.

Puya seeds are best found from nurseries or online stores. The seeds can be grown in a greenhouse where the temperature is at least 70 degrees F.  Use well-draining potting soil to sow the seeds. The seed germination takes time and make sure that the soil is moderately moist until the seeds germinate. After germination, place the seedlings in an area where they receive bright light but protected from the harsh midday sun. When the plant forms the first rosette of leaves, transplant them. Puya plants will produce offsets over the years. It is easy to grow new plants from the divided offsets.

How to Care for Puya

When planted in the ground do not forget to water the plants at least once a week during the summer. Potted Puya plants need watering when the topsoil is dry. When the plant remains dormant in winter, watering is needed once in a month. Removing the spent foliage from the plant gives a better appearance to the plant. Once established, these plants are drought tolerant.

December 10, 2019
/ by
dayliliesinaustralia
Ask A Question