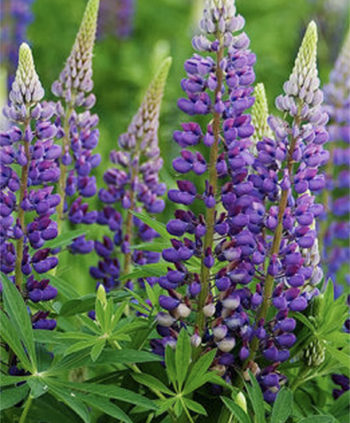 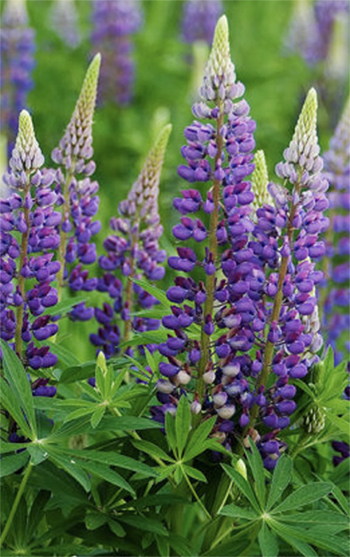 Lupinus, commonly known as lupin, are flowering plants that belong to the legume family. There are over 200 species of this genus found as annuals, perennials as well as evergreen shrubs. They are prominently seen in dry regions and occur commonly in Northern Africa, southern Europe and the Americas. The best known hybrid of lupins is the Russell lupins and many of its species are grown as ornamental flowers.

Russell lupins are the popular flowering lupins that have flower spikes that can grow as tall as 1m in height. These perennials flower in a wide variety of colours. The russell lupins will flower in the spring with the tall bearded iris and set seed in the summer. They are best suited to be used as garden bordering plants. The colour of the lupin flowers varies from white to purple and orange. The flowers may be annual and last for about a season. It grows a long tap root and does not like to be moved from its original position. The lupins have palmate leaves that are mid green in colour and the flowers are held in place by tall spikes. The flowers are pea shaped and can also be seen as bi-colours.

How to Grow Russell Lupins from Seed?

It is very simple to grow the Russell lupins. These perennials will thrive in areas where there is enough sunlight and a well drained soil. If you are planting a lupin from the seed, then you need to either soak the seeds in lukewarm water overnight or scratch the seed surface so that the seed coat can be easily penetrated. You can also chill the seeds of the lupin plant in the refrigerator for about a week before planting them in the soil. It can grow from seeds sown in early spring or even from the plant tubers. You can also plant Russell lupin seeds during the autumn season so that the chilling needed for the seed can be provided by Mother Nature itself. With quality care the lupin plants will produce new seeds that will finally re-produce more flowers in the following season.

If you want to enjoy more Russell Lupin blooms, then you need to give the lupins plant food that is rich in phosphorus. The growth of the foliage can be enhanced by using nitrogen rich fertiliser. The spent blooms need to be deadheaded to encourage more lupin flowers. The spent spikes also need to be pruned to ensure strong plant growth. The propagation of the plant is from the seeds or cuttings or by division that has to be done in early spring. The seedlings of the plant need to be planted in the soil when it is small as it does not like root disturbance when it grows.

August 18, 2016
/ by
dayliliesinaustralia
Ask A Question