Billy Buttons How to Grow and Care for Craspedia

How Craspedia Billy Buttons Grow in The Wild in Australia 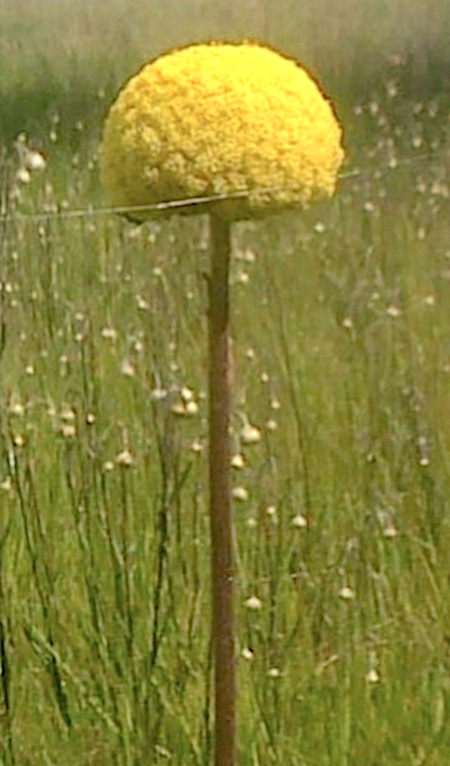 Craspedia popularly known as Billy Buttons is a flowering silver-leaved perennial groundcover with woolyheads of globe shaped blooms. A classic Australian and New Zealand native plant that’s flowers grow to around 50cm tall sometimes more. From late spring to early summer, November in Australia small spherical 3cm in diameter golden mustard yellow flower heads grow on top of long blooming leafless stems. It enjoys moist well-drained soil, yet it also survives in drought and severe heat with little water in its natural environment during the summer months. As I travel down the road, I can observe mass plantings of the self-sown plants of button flowers, which creates a picturesque scene.

The method to imitate and cultivate them in your garden

The Australian wild flower in its natural environment is dormant throughout the hot dry summer months and since the plants roots grow so deeply into the ground it does not require any additional water other than what falls out of the sky year round.

Foliage begins to break dormancy in Spring. During winter and spring the ground is wetter and shorter nights and longer days cause the plant to wake up and sprout its grey leaves and more.

A moist environment is essential for flowering Billy Buttons in the spring.

Craspedia Billy buttons bloom for three weeks to a month depending on the heat.

After blooming the plant will set seed and the seed will fall to the ground where it starts growing.

As a result, the lifespan will begin once again.

Billy buttons naturally grows in low lying regions at the reserve near my property and as you can read it requires minimum maintenance. I have frequently noticed patches of these blooms throughout the years on the sides of the road where the government grader has created culverts and the road side has not been disturbed for a long time.

In floristry, Craspedia billy buttons are an excellent choice for bouquets either for fresh or dried flowers.

Australians are so fond of their native flowers that they handed them to the 2000 Olympic games gold, silver, and bronze medalists in Sydney, New South Wales, Australia in October 2000 to show the flowers off to the world. All of the flowers in the Australian floral bouquets were native and grown in Australia – Billy buttons, Kangaroo paws, Waratahs, Grevilleas, Eucalyptus, Geraldton wax, and other Australian native plants.

June 5, 2022
/ by
dayliliesinaustralia
Ask A Question