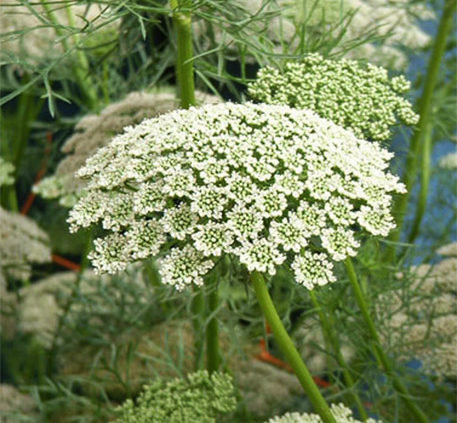 While many people know of Queen Anne’s Lace flower through the folk tale about Queen Anne of England pricking her finger and dripping blood onto the white lace flower, most are unaware that the plant is also an edible wild carrot. Queen Anne’s Lace has a rich history of being used as a food source. Early man grew it, Romans ate it, and Colonial Americans boiled it and consumed the plant as a special delicacy. Modern gardeners will be interested in growing Queen Anne’s Lace for its aesthetic value, culinary values, and for the beneficial insects that it will attract to the surrounding area.

From a visual aspect, Queen Anne’s Lace is quite stunning.
The plant can grow to be roughly five to six feet tall. Additionally,
Queen Anne’s Lace blossoms large, white or pink lace flowers. Each large flower is actually comprised of numerous clusters of tiny flowers that all blossom to appear as if they are one larger entity. These clusters look great in both a vase or their natural outdoor setting. These flowers bloom in late spring until late autumn, during this time they open up to allow for pollination. In addition to its flowers and tall stature, Queen Anne’s Lace also has large flat leaves that look very similar to those of the plant’s cousin, Water Hemlock which is toxic.

Besides the plants visual elements, Queen Anne’s Lace also has the edible qualities of wild carrot’s. Growers can harvest the plant’s tap root and use it for a wide variety of different dishes. It is commonly recommended that people interested in eating the root do so within the plant’s first year. The root can be used in soups, teas, and stews. In addition to being able to cook with the root, individuals can use the leaves and even flowers as well. The leaves can be chopped up and used in salads. While flowers should be fried and then added to a dish.

Aside from simply being both a pretty plant and food source, Queen Anne’s Lace can also help garden’s to benefit from another of its interesting characteristics. The plant is well known for attracting bees, ladybugs, and ants. Primarily, it can help to bring beneficial insects into the area. These can then pollinate other plants, eat unsavoury insects, or harvest aphids. Even growers who might not be terribly interested in eating their Queen Anne’s Lace should consider the plant simply because it can help the entire garden to prosper.

Queen Anne’s Lace is a very interesting plant. It has had a rich history as a food source and has been used in meals since a very early point in human history. It is also quite attractive and can add to any garden. Additionally, Queen Anne’s Lace can still be added to dishes and be used for soups, salads, teas, and stews. And the plant is great for attracting beneficial insects into garden environments. These factors make Queen Anne’s Lace a great choice for any gardener looking to add character and history to their planting lot.

March 1, 2014
/ by
dayliliesinaustralia
Ask A Question