A part of growing your own garden is learning how to deal with uninvited guest plants called weeds. Using harmful and poisonous chemicals to control weeds in your home garden are becoming a thing of the past. More and more people in Australia are switching to organic gardening traditions to tend to their patches of paradise. As an organic gardener, you want to find environmentally safe ways to control the problem of weeds. Weed seeds below the top inch of soil tend to not get enough sunlight to sprout, but those above the top inch that do sprout deprive the plants you want to grow and flourish in your garden, of much needed water, nutrients, sunlight and growing space. You want to remove them in a way that is the kindest and cooperative while keeping in mind the beautiful garden of your dreams that you hope to have.

There are several affordable, natural, easy and safe ways to organically tend to weeds in your garden. The first and least harmful way to establish weed control is by doing some weeds pulling. Some weeds like dandelions tend to be harder to pull up than others and it is best to try to remove them before they get a chance to mature. An old-fashioned method of making weed control easier is to pull up weeds after it rains. The dampness of the soil and roots allows for weeds to seemingly pop up from the ground. In dryer conditions, it is better to use a hoe with a sharp edge to cut off weeds a little below the soil line. This will cause them to shrivel and die allowing them to be handily removed from the ground. Lopping off the heads of weeds before permitting them to seed will decrease the number of weeds in your garden.

Another way to cut down on your level of weeds is to plant ground cover plants like white Jasmine thereby outnumbering the weeds. Placing the plants you want to grow close enough together to shade the soil this will also restrict weed plant growth. Ground covering plants simply out compete weeds for nutrients, moisture and light. You could also smother the weeds with newspaper, mulch, or both. Cover the weeds in such a way as they will not receive enough or any sunlight to thrive and consequently expire. Pouring boiling hot water directly onto the weeds will cause them to rapidly die. Running a flame over them will cause death within days.

Depriving weeds of receiving sufficient amounts of water is another effective method to reduce their growth by 50 to 70 percent. You can do this by using a drip or soaker hose beneath mulch to adequately irrigate the soil for only plants you want to multiply. Vinegar by itself or as a mixture with half water forms a deadly homemade weeds killer and the eight percent by volume acetic acid in vinegar is the key homemade weed killing component. Pouring the mixture on long tap rooted weeds like dandelion will make the buggers succumb within a few days. Be careful though, while vinegar kills the top of the weed plant it may not kill the root. Baking soda is a good for smaller weeds, especially if those weeds are hard to get to whereby the roots are difficult to remove by mixing a strong solution of baking soda with water and pouring the mixture on and around the weed this will exterminate the weed. Below ‘tumble weed’ what a mess! I get this amongst my daylilies in the garden some years. 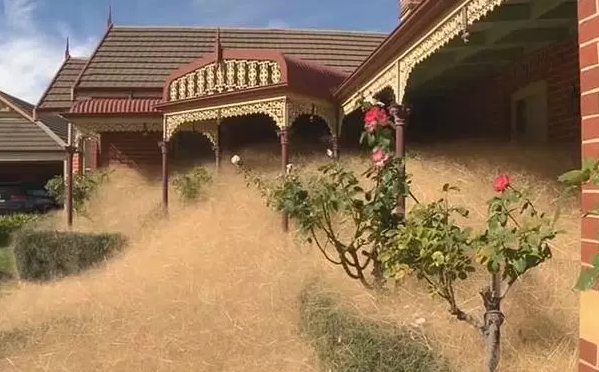 Some Common Broadleaf flat weeds that grow in Australia sometimes found in lawns during winter or spring, can be also found on the side of the road and in farmers paddocks are Paterson’s Curse, Swinecress, Thistle, Shepherds Purce, Creeping Oxalis, Nutgrass, Paspalum, dandelion, Docks, Chickweed, Capeweed, Deadly Nightshade or Belladonna, Bindii, Wire Weed, Dandelion, Clover, cudweed, Creeping wood Sorrel, Paterson’s Curse and Marshmallow. Some of the grasses are Crabgrass, Bermudagrass, silver Crabgrass, Tumbleweed, Onion Grass or Onion Weed and Paspalum. Some of these weeds are very invasive they can also smother plants in your garden.

These are all efficient and effective ways to prevent and keep your garden naturally weed free for seasons to come.