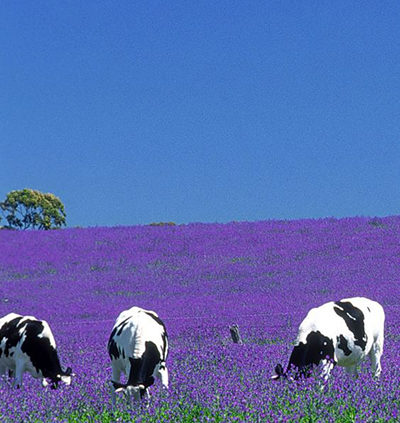 Paterson’s Curse Plant All About The Invasive Weed

Paterson’s Curse (Echiumplantagineum) belongs to Boraginaceae. This is native to the Mediterranean region and is an invasive plant in Australia growing in pastures and roadsides. The plant got its name from the Paterson family, Jane Patterson in Cumberoona, New South Wales. This plant was first planted it in their garden in the 1880s. The plant is called as Salvation Jane, Riverina Bluebell, Blueweed or Lady Campbell weed in other parts of Australia. This weed replaces the desirable plants in the pastures in southern Australia and is causing great loss of cattle and sheep producers. This perennial plant is 10-150 cm tall it produces branches as the plant ages and bears purple or blue trumpet shaped flowers. The flowers are produced in clusters and contain five petals.

Though Patterson’s Curse plant is used as food by grazing animals in drought situations, it can be fatally poisonous within a handful of days to animals, which do not have a ruminant digestive system like the horse. It is also poisonous to pigs and young or breeding stock of cattle. This plant contains the poisonous alkaloid called Pyrrolizidine and when consumed in large quantities by livestock can cause death. Prolonged foraging of the weed by sheep can cause liver damage. The alkaloid had a cumulative effect and causes the sudden release of copper into the blood of the cattle causing the death of the animal.

This plant may be annual or biennial and usually germinate during early autumn or winter. But the plant is highly adaptable to Australian conditions and can germinate any time of the year if the proper moisture is available. The plant forms a broad rosette of leaves during the winter months. Flowers are produced from spring to summer if appropriate conditions are available. Each flower produces four seeds of which three will get shed and one is retained in the calyx for dispersal. The plant produces seeds in prolific numbers. The seeds can remain viable for about six years. This weed easily establishes in the barren land and establishes slowly in areas where a good ground cover is present. The plant is resistant to dry conditions and produces new shoots and flowers very quickly if mowed using lawn mowers. The seeds get dispersed by attaching to fur or wool of animals and the seeds can pass through the alimentary canal of animals without any damage.

The best way to remove isolated plants is by manually pulling out the plant with its root system and burning the plant if it has started flowering and seeding.

Biological control solutions are also used in various parts to control the invasion of this toxic weed. The crown weevil and flea beetle are found to be highly effective in controlling the spread of the plant in pastures and gardens.

June 2, 2017
/ by
dayliliesinaustralia
Ask A Question