How to Get Rid of Spiders Naturally

Many people consider spiders a menace as the chemicals produced by them can cause skin reactions. There are many ways to keep out these little creatures without harming or hurting them. While some spiders spin their webs, others are weavers and then you have the spiders that are only hunters and some are just down right dangerous. There is no need to use any harmful chemicals to get rid of spiders. Here are the natural and safe methods to keep your home and garden free of spiders. We will tell you how to get rid of spiders naturally using the best natural spider pest control methods below.

The most important and effective way to keep the home free from spiders is to clean them regularly. Remove the clutters and do regular dusting, vacuuming and mopping. Give more importance to cleaning of unused and darker areas and corners in the home. Damp areas like bathrooms and under the kitchen sink should be given extra care while cleaning. Remove any cobwebs in and around the house and fences in your house yard. When there are fewer insects like mosquitoes and flies in the home spiders will not select your home for a comfortable stay. Cleaning makes a big difference and is one of the best natural spider pest control methods.

Plants and plant debris near to the home, wood piles, grass clippings can act as the breeding home for spiders. Plants and trees slanting over to your home provide easy access for spiders in your house. Remove any plant debris and cut down the branches of trees to keep the spiders at a distance. Any gaps in the door and windowsills have to be covered to prevent the entry for crawlies.

Using essential oils with strong scent is a good option; rub the citrus scented oil on the entry points of spiders, like cracks on the wall, cracks in door frames, window frames, etc.

You can also use a spray of lemon juice mixed with water to keep away spiders. Scented oils are known to be one of the best natural spider pest control methods so give this a try.

Spiders do not like the smell of tobacco and this can be used as a spider repellent. You can either place tobacco leaves available from grocery stores in places where spiders are commonly seen. You can also make a spray of tobacco by soaking the leaves in water for a few hours. Spraying the solution inside the house to keep spiders out and is another one of the best natural spider pest control methods available.

Vinegar has much household use and keeping the spiders away is one among them. You can use apple cider vinegar diluted with water to spray in every nook and corner of the house and on door and window frames. You can also use any white vinegar for this purpose. Another way of using apple cider vinegar is mixing it with peppermint oil and liquid soap and after mixing these properly, spraying it around the house and inside the house. It is necessary to re-spray the mixture every two days. Apple cider vinegar is considered one of the best natural spider pest control methods

Spiders are everywhere Australia wide, but are less threatening than snakes, bees and wasps. Some of these spiders we have to watch out for are Funnel Web Spider, Red Back spiders, White Tail Spider are considered the more dangerous while the Daddy long legs spider is a pest in the house. 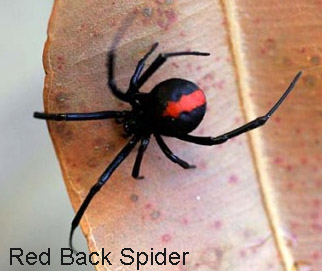 Red back Spider which is closely related to the black widow spider from North America which has similar markings. Many white eggs sacs can be laid, each sack can contain up to 500 eggs which are usually confined in a spider web, spun with the red back female spider sitting close by. The eggs can only take 4 weeks to hatch and as little as 3 months to mature. The female red back is 1cm long while the male red back spider is tiny. They are recognised by the red stripe on their back, which is how they got their name as red back spider. You usually see the red back spiders in your garden shed and in amongst your garden pots sometimes. The garden wolf spider is usually seen in the garden as well. 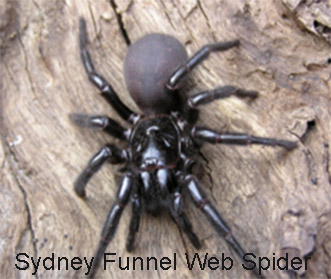 Sydney Funnel Web is considered to be the most dangerous spider in Australia. The male Sydney funnel web spider is considered the most dangerous it is found Northern New South Wales and Queensland it is 4 to 5cm long and are more active in the summer months. If you get bitten by a large black spider in Sydney or around Sydney area it would be best to seek medical attention straight away as there is anti venom available and will be needed if one bites you. These are lazy hunters they build funnel or tube shaped webs; then sit and wait for their prey to be trapped such as flies and moths or just anything that gets trapped in their web. 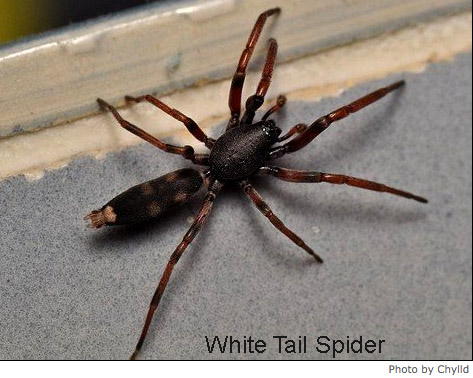 White Tail Spider is found in urban areas of Australia mainly eastern and southern Australia, they wander at night on the hunt for other spiders. They are described to have a cigar shaped dark grey abdomen with a creamy white spec at the tail and brownish legs that are around 20cm in body length the males are smaller about 12mm.

Daddy Long Legs Spider found through out Australia loves to live in houses, (Pholcus phalangioides) they have extremely long fine light brown legs with a small body compared to the size of the legs. And no wonder they invade our houses so much is because as the female can live up to three years while the males die after mating after one year. They love to live under or behind furniture where they cannot be seen, in sheds, garages and eves of houses. It was introduced to Australia accidentally from Europe. Daddy long legs are a menace it’s the spider mostly found in Australian houses.

Huntsman spider or Tarantula, Giant Crab Spider, are some other names used instead of the huntsman spider. They are great and help control the pests by eating small insects they tend to run away and hide if you go near them. Huntsman spiders are large brown spiders with hairy legs; these long legs are known to be up to 15cm Huntsman spiders are completely harmless, so let them help you, keep your house clean from other insects.

Spiders try to invade our house and garden when it rains or when the temperatures get very low. So, use the above organic methods to keep away the spiders, immediately after rains and during winter time more frequently.

January 18, 2016
/ by
dayliliesinaustralia
Ask A Question