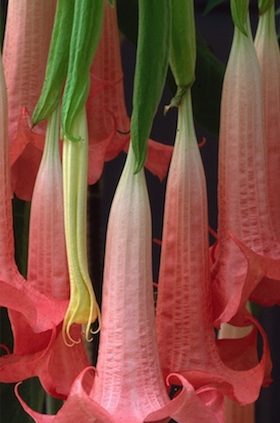 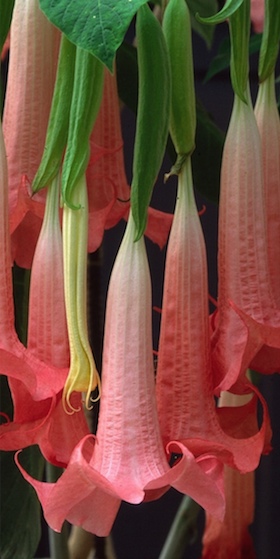 Angel’s trumpet is the common name used to describe two different species of plants in the Solanaceae family. These two genus are called Datura and Brugmansia which both contain several flowering plants. In Australia, the name Angels trumpet is most commonly used for the Brugmansia genus and its botanical name is Brugmansia suaveolens. Unlike the Datura bush plant with its erect flowers, the Brugmansia grows as a shrub or small tree, has hanging or pendulous flowers, and have no spines on their fruit. Angel’s trumpet is known for its nocturnal, sweet fragrance and colourful blooms that flourish from late spring until autumn. These plants are native to Central and South America and typically have flowers with hues of pink, white, or yellow which have wide, flared openings. These plants can be placed in containers and are often used as borders because these are showy, evergreen plants. The presence of Angel’s trumpet in your home or garden is said to – evoke tropicalia.

The Brugmansia suaveolens can reach a height of 3 to 11 metres with flowers that range from 14 to 15 centimetres long and 10 to 35 centimetres wide. You should plant Angel’s trumpet in early spring keeping in mind that each seedling has the potential to be a completely unique hybrid as this plant does not grow true to seed. They usually bloom white at first and gradually come into their true colour. It is important to note that this may happen after a few seasons. Angel’s trumpet can be grown indoors as well as outdoors. When you are growing this plant inside you can water freely in the warmer season, keep just moist during the winter, and fertilise when the flowers bloom. When you are growing Angel’s trumpet outdoors keep the plant in moist, with well drained soil. The plant should be placed where it can get full sun in the mornings and filtered shade in the afternoon.

Angel’s trumpet is a fairly low maintenance plant to line and brighten the edges of your Australian green spaces while filling the night air with its beautiful aromatic fragrance.

Poisonous Possibilities Angel’s trumpet is often thought to have come about due to the horn shaped flower, but in reality, it refers to an element that comes about if the plant is ingested. This plant is very poisonous and it is said that there is a trumpet like sound heard by those who consume a fatal amount of it. People often seek out tea made with the plants seeds for its supposed medicinal value and/or hallucinogenic qualities despite its toxicity. Some symptoms experienced by those who consume Angel’s trumpet include bewilderment, delirium and hallucinations followed by drowsiness, sleep and or coma. Another common symptom is dilation of the pupils. However, not all these symptoms occur when the plant is ingested. Some people have suffered from shaking and convulsions after drinking the tea. These uncontrollable movements may require those people to be restrained, sedated or both. Around a third of reported sources convey death as an outcome of Angel’s trumpet poisoning. This is highly unlikely in a gardening atmosphere though due to the extremely unpleasant taste of the plant in raw form which wards off the potential for accidental poisoning from direct ingestion.

September 4, 2014
/ by
dayliliesinaustralia
Ask A Question