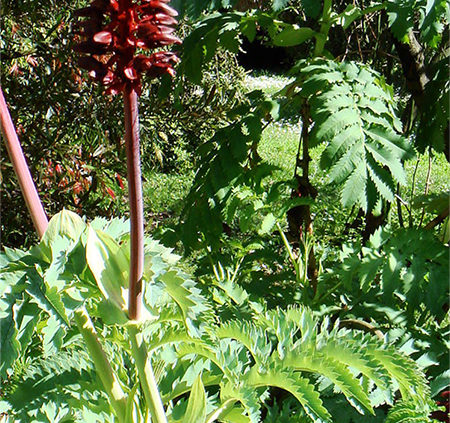 Know About Honeybush or Melianthus major

Melianthus major is a perennial shrub with fascinating foliage. The plant with common names such as Honeybush, cape honey flower, touch-me-not or ‘Antonow’s Blue’ is native to South-western Africa. It is easy to find this plant or to grow its seeds because it is far from rare. The truth is it has been naturalised in southern parts of Australia and in the south-eastern Queensland. It is considered a weed in South Australia and Victoria. The sprawling habit of the plant gives a jungle-like look to the area where they are planted. They can grow to a height of 3 metres and can spread to an equal width. This plant has characteristic large pinnately compound glaucous leaves with serrated edges, which are bluish grey green in colour. The plant produces tubular, nectar-laden and highly fragrant contrasting reddish brown flowers, which attract the insects and birds. Flowers are produced in spring or early summer and are borne on thin racemes, which are about 80cm long.

The Honeybush plant needs full sun and moist soil. It also needs well-drained soil to grow. It can also be grown in pots in lightly shaded areas. The plant needs moderately fertile soil with acidic, alkaline or neutral pH. The Honeybush plant requires shelter from the drying winds and from the excessive cold during the winter months. The showy shrub will dieback naturally during winter and re-shoots during spring. However, it cannot withstand severe winter conditions. To protect the plant from winter wetness, top-dress and lay down flat some dry mulch. They are heat tolerant and requires moderate watering. The plant shows good growth in a single season and fills large areas in the garden when the conditions are favourable. To give a compact look to the plant, it is better to prune them. The plant can become woody within a few years and it is better to replace it with a fresh one at that time.

The Honeybush can be propagated using seeds or cuttings of the herbaceous basal stem or by using the softwood cuttings. The seeds need to be sown during spring in the soil containing a good amount of compost or in seed raising mix. Cover the seeds with a thin layer of compost or river sand and keep them moist. It will take 20 to 30 days for the seeds to germinate. When the plants are large enough, transplant them to garden or to the pots. The division of the plant can be done during early spring. The softwood cuttings should be planted during spring or summer.

The Honeybush can be used in garden beds or as borders or as a focal point in your garden. Though caring for this plant is not a difficult task, the sprawling habit makes pruning a must to keep the plant and look better in shape. When used as an ornamental plant, it is better to cut back the stems of the plant with just three inches above the ground during spring. Make sure that the plant develops new leaves every year.

The important cultivars of the plant include the Purple Haze with finer foliage and purple-tinged foliage and stems and the Antonow’s Blue with bold and textured silvery blue foliage.

October 12, 2018
/ by
dayliliesinaustralia
Ask A Question