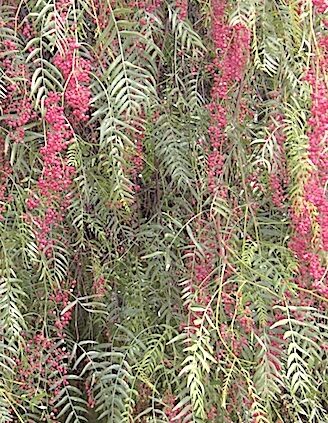 The Schinus Molle tree, sometimes known as the peppercorn tree, is native to South America and Peru. It is the largest representative of its family and might also be the longest living member. A typical long lived evergreen shade tree that grows in hot dry areas of Australia. Small trees planted decades ago, are still growing around dairy farms, sheep farms, and rural schools. Today huge peppercorn trees are still grown to shade livestock at old shearing yards, cattle stations, remote local school yards, and even on the premises of our local pub. I have a friend that lines her driveway with them. My grandfather use to call them peppers.  Peppercorn bushes also attract swarms of bees.

More About the Pink Peppercorn Tree

The high demand for its wood in the construction of saddles is one of the reasons why the peppercorn tree has spread around the world. The peppercorn tree was planted by Spanish colonists as a source of wood for such purposes. Of course, its beautiful appearance made it valued as an ornamental tree, and its fruits were utilised as spices.

The berries on this tree are small and round, resembling pink pepper. The flavour of these fruits is comparable to that of pepper. Despite the fact that the peppercorn tree has nothing to do with the genus “Piper” which comprises the common pepper. This explains why the fruits of the peppercorn tree are sold and used as spices.

However, there was considerable debate concerning the usage of these fruits in meals. Back in 1982, it was thought that the fruits of this tree may cause poison ivy-like symptoms in humans. The poison ivy is a close relative of the peppercorn tree, which contributed to the confusion. As a result, the FDA prohibited the tree’s importation and the marketing of its fruits as spices.

Fortunately, the story has a happy ending, as French researchers discovered that peppercorn tree fruits are neither poisonous nor bothersome. Nonetheless, they can cause unpleasant side effects in children, such as diarrhea and vomiting.

The peppercorn tree is a tall tree that may reach a height of 15 metres. Despite its height, the tree is recognised for its rapid growth. Its limbs have leaves of fern-like foliage, that weep and hang towards the ground.

During its flowering season, the tree produces little white flowers in spring, which are arranged at the ends of the branches. This is where the peppercorns, organised in panicles, will gradually develop by summer. The pea-sized berries will be green at first, but as they ripen, the berry colour will change to pink peppercorns with a pink papery shell containing a single seed.

When the berries, leaves, and even the bark of the tree are crushed, they produce a characteristic pepper-like flavour. The tree’s bark is grey and ash-like, and it is commonly observed leaking sap. It also contains twisted flakes, as if someone scraped its surface.

Interesting Facts About the Peppercorn Tree

Although the peppercorn tree was originally planted for timber and decoration, it was discovered that the aroma of the berries and pinnate leaves may be an effective insect repellant. Planting peppercorn plants around your house will help you get rid of mosquitoes and flies organically.

How to Plant a Peppercorn Tree in the Ground

If you decide to plant peppercorn trees on your property, you must first verify that you have enough space to support each tree at maturity, which may grow up to 50 feet tall and wide.
The tree also prefers a sunny location and soil that drains well.
It is wind, cold, and drought-resistant Schinus species, hence it will not thrive in wet conditions.
Taking the effort to choose the best location for a peppercorn tree will save you a lot of bother and care. For example, if the soil does not drain properly, microorganisms might develop in a damp environment and harm the tree’s roots.

Planting the Tree in the Soil Entails –

How to Plant Peppercorn Tree Seeds

Before planting pink peppercorn tree seeds, immerse them in a cup of lukewarm water the night before planting. This allows the seeds to absorb water, which will be needed to speed up germination and give the seedlings a head start.

How and When to Prune Peppercorn Trees

Peppercorn trees must also be pruned on a regular basis. The canopy will not be able to reach the ground as a result of this. Winter is the optimum time of year to trim the tree and achieve the desired canopy form.
Keep a watch out for suckers that may develop from the tree’s base. They must be cut as soon as they appear, every time.

November 20, 2021
/ by
dayliliesinaustralia
Ask A Question