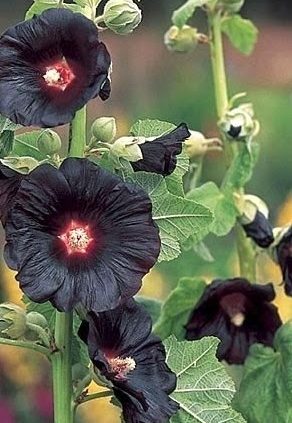 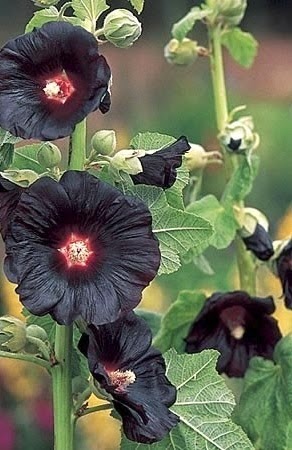 Hollyhock Rust in the Flower Garden – Hollyhocks are beautiful flowers great for cottage gardens that will take two years to complete their full lifecycle to flower, hollyhocks flower in their second year of growth, these flowers are classed as biennials native to Asia and Europe yet members of the malvaceae family. Hollyhocks require a cold treatment during the winter which assists to complete their metamorphosis, therefore, their part growth takes place in the first year and after the cold treatment, the second part occurs in the second year resulting in the hollyhock being very tall plants that can grow up to 9 feet with the outcome of impressive double or single flowers. Hollyhocks self seed producing their own seeds after flowering whereby their seeds can be harvested from the plant itself or let drop on the ground to germinate themselves. During the winter season when the hollyhocks are dormant, the plants are cut to ground level and covered with a mulch layer that helps prevent wind and precipitation from harming the plants. Sunlight is very important for hollyhocks to grow, where as frequent watering is also mandatory.

If buying your hollyhock seedlings or seeds from a nursery in Australia you can either choose the double variety or single flowered plants in either seedlings or in packets of seeds. The double and single flowered varieties come in a good collection of colours, pinks, crimsons, reds, whites, yellows and rose, the single flowered hollyhocks come in one extra colour a very dark purple black being the Nigra black hollyhock. Hollyhocks have a good germination rate and the best time to plant hollyhock seeds between December and February, sown directly into the garden in Australia so that these plants get a head start before the cold winter sets in, likewise the seeds can be started indoors in black plastic pots during the winter months, planting the seed inside just under the soil results in seedlings germinating in just three weeks then transplant 20 inches apart into the garden after the cold frosts have moved on in spring. The right location is very important for successful growth of these plants. Hollyhocks are the perfect flowers for cottage gardens besides having a pretty structure, they can be used as a background perennial border plant for other flowers growing in your garden with rich decomposed manure mixed with your existing garden soil has numerous benefits for this plant.

These plants may be tough but they do have a number of disease and insect problems with the most common one being Hollyhock Rust. Hollyhock rust is a fungus that damages the beauty of hollyhock flowers and leaves. It first shows on the bottom side of the lower leaves as a yellow to orange colour that darkens as the disease advances. The spots quickly come together destroying large parts of the leaves with some severe cases having the disease advance into the stem. Small infections of hollyhock rust may not cause harm to the plant, but severe infection can cause the plant to wilt and its leaves to drop turning it into an ugly sight to see.

To avoid and prevent the beautiful hollyhocks flowers and leaves from rust, good sanitation is important. On detecting the first signs of the rust disease on the leaves usually in spring. When symptoms are first noticed immediately pick off the leaves and destroy them by burying them or burning the infected leaves, in an unused portion of the garden do not recycle the rust diseased leaves into compost. Immediately after the flowering period is over, the infected plants must be cut back low growing, to the line of the soil. Mulch should be added around the plant during springtime to prevent rust spores from overwintering in plant debris. A proper location is equally important to minimise the chances of the plant getting an infection. The ideal location is one that has plenty of sunlight, sufficient circulation of air and proper soil drainage. The plants also needs to be watered early in the day making sure that the leaves will be dry by dark. You can also try planting hollyhock plants that are more resistant to rust, like the Alcea ficifolia and the Alcea rugosa. If good hygiene fails to control the disease, then you will have to get out a good organic fungicide that can be applied to the plant in the spring, as the hollyhock starts to grow before infection takes place. To avoid and prevent the beautiful hollyhocks flowers and leaves from rust, a soft spray of an organic fungicide such as eco-rose can be applied to the foliage. This organic fungicide will need a 100% protective coating on both sides of the leaves, in turn, this stops the new spores from germinating. Bees and praying mantis and other garden beneficial insects are safe from this product as well. When you buy eco-rose you must remember to buy some eco-oil as well. The eco-oil is needed in the mix to lodge the solution to the leaves, this will also help spread the liquid all over the leaves evenly. It is said to attack existing fungal infections within minutes, not only rust but black spot on roses and powdery mildew as well, you can easily purchase this product at Bunnings warehouse. It is certainly worthy of adopting into your garden cupboard along with your other organic sprays in your garage or storage shed, it is also said to be effective on fruits and vegetables as well as roses or any other product that has rust, black spot or powdery mildew complications.

June 9, 2014
/ by
dayliliesinaustralia
Ask A Question